Jesus and his disciples left from there and began a journey through Galilee,
but he did not wish anyone to know about it.
He was teaching his disciples and telling them,
“The Son of Man is to be handed over to men and they will kill him,
and three days after his death the Son of Man will rise.”
But they did not understand the saying,
and they were afraid to question him.

They came to Capernaum and, once inside the house,
he began to ask them, “What were you arguing about on the way?”
But they remained silent. They had been discussing among themselves on the way
who was the greatest. Then he sat down, called the Twelve, and said to them,
“If anyone wishes to be first, he shall be the last of all and the servant of all.”
Taking a child, he placed it in their midst, and putting his arms around it, he said to them,
“Whoever receives one child such as this in my name, receives me;
and whoever receives me, receives not me but the One who sent me.”

This gospel is kind of a double feature.  We have part 1 where Jesus and the disciples are walking together and Jesus is teaching them. Part 2 has the disciples arguing over who is the greatest among them.  I’m going to focus on the second part, but I just want to say one thing about this part 1 first.

Part 1 – Gobblygook to Gospel
Jesus is saying some pretty difficult things on the walk through Galilee.  And the disciples don’t understand. How often have you heard a teacher say something that you didn’t understand? Does it sound like gobbleygook ro perhaps Charlie Brown’s teacher?

How about your parents?  I’m not speaking of not wanting to listen to your parents here – but when they say a word you don’t comprehend or speak about a difficult subject. When you don’t understand something, the worst thing you can do is not as questions.  Sometimes, you are afraid of looking stupid or you get embarrassed.  But I guarantee you, that if you don’t understand something, most of the rest of your kids around you have similar questions. Be brave and be the one who wants to understand what is going on and clarify the message. Just as Jesus wanted his disciples to understand, all of you teachers are there because they want you to learn.

Part 2 – The Greatest
On their walk through Galilee, the disciples were arguing over who was the greatest amongst them. Remember, a few lessons ago, Jesus had sent them out in pairs to perform miracles in His name. I can imagine their arguments.

It would have been a series of oneupmanship, where each person is trying to be better than the previous. It doesn’t sound like a very giving attitude – each disciple was trying to somehow diminish the other to enhance your own grandeur.

In many places in the world, people try to identify who is the greatest. Who are some of the Greatests that you know of?

Albert Einstein, some say, was the smartest guy around.
Michael Jordan was the greatest basketball player.  Or is it now LeBron James?
David Beckham is the greatest soccer player. Or maybe Ronaldo?
Who are some of your favorite Greatests?

They even have a funny name for this – GOAT.  Does anyone know what that means?  GOAT – Greatest Of All Time. 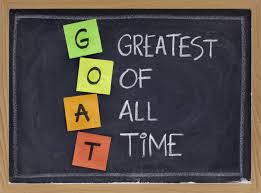 But you notice, as soon as you have a new GOAT, someone else is now lesser? The guy who used to be THE GREATEST, is now #2. And everyone down the line is diminished, because somehow they are not as great as the #1.

I don’t think God wants us to work this way. In economics, this is called a Zero-Sum-Game.  One winner, other losers.  I think the way God wants us to work is to try to be the Greatest You Can Be. The person who gives of himself to lift others up. The person who helps others grow; who guides them from places of darkness to places of light. He says – be a servant to be first.  That is Great.

Jesus then brought forth a child. and said “whoever receives this child, receives Me”. We are supposed to give of ourselves to those less capable – guide them in their paths.  How does this work if you are already a kid?  Well – find littler kids and see how you can help them. Be a good friend. Look to see how you can serve them and help them grow – In knowledge – In strength – In Faith.

Jesus wants our path to always try to be the Greatest – not so we can improve our own standing, but to raise up those around us. To make them be the best they can be.

Remember how we were speaking earlier about the Greatest in each category.  One of my greatest is a scientist named George Washington Carver. He found more than 100 things you could do with peanuts, back in the 1800s.  There is a nice quote attributed to him.

If you want to be the Greatest in God’s kingdom, learn to be the servant of all. Leverage your strengths to be the person who:

This entry was posted in Kids Sermon. Bookmark the permalink.