Many of Jesus’ disciples who were listening said,
“This saying is hard; who can accept it?”
Since Jesus knew that his disciples were murmuring about this,
he said to them, “Does this shock you?
What if you were to see the Son of Man ascending
to where he was before?
It is the spirit that gives life,
while the flesh is of no avail.
The words I have spoken to you are Spirit and life.
But there are some of you who do not believe.”
Jesus knew from the beginning the ones who would not believe
and the one who would betray him.
And he said,
“For this reason I have told you that no one can come to me
unless it is granted him by my Father.”As a result of this,
many of his disciples returned to their former way of life
and no longer accompanied him.
Jesus then said to the Twelve, “Do you also want to leave?”
Simon Peter answered him, “Master, to whom shall we go?
You have the words of eternal life.
We have come to believe
and are convinced that you are the Holy One of God.”
Keywords

In the past few weeks, we have been speaking about Jesus attracting a crowd around him.  They were attracted because they were looking for something.  What were they looking for?  Pretty simple:

What do you think the Jewish people were looking for in a Savior/Messiah?

Well, they wanted to crown him king and have him overthrow their oppressors, the Romans.. They wanted a military/political hero like Joshua. And, as it turns out Jesus’s name originates from a rendition of the Hebrew Yeshua, which is how they said Joshua.

Who remembers what Joshua did?

Sounds like a superhero to me! Lets go back to what recently happened with Jesus. 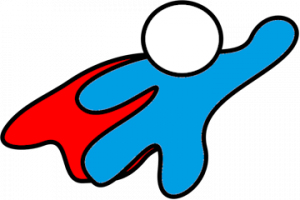 If I were looking for a superhero to help me overthrow the Romans, Jesus has all the credentials.  Imagine, your army is fighting another army.  But anyone on your side who gets hurt can now be healed.  Anyone killed, brought back to life. No worries about bringing food – just bring the kid with 5 loaves and 2 fish and the army is good for food. Need to run away?  Just walk across the water where your enemy cannot follow. This guy was the superhero of all superheros!  Better than Spiderman, better than Superman! This is who they were expecting for the Nessiah – the guy who would save them!

But after showing all of these amazing “powers”, what did Jesus do?

He told them he was something else entirely. He said he was the bread of life.  He said that he was one with the Father. That he had the keys to everlasting life. And to gain eternal left we had to eat of his body and drink of his blood. He also told us that the Son of Man would suffer and die before he came again in his glory. This was not the superhero talk the people wanted.

Jesus started off this gospel saying his teachings were hard – really hard.  So hard, in fact, that the people were shocked. Jesus just told them to be saved they needed to “eat my body and drink my blood” to be saved.

DRINK WHAT? EAT WHAT?

That’s crazy talk! And more – Jesus didn’t want to be king?!?! Neither of these were what the Jews wanted in their Savior. They wanted a Super-Savior to lead them. And what do people do when something doesn’t meet their expectations?

Imagine – a huge crowd shows up for a concert, expecting an earth-shattering rock and roll band something bigger than the Rolling Stones. The crowd was expecting lights, thundering sound, and spectacle. Instead Jesus pulls out a Ukulele and starts strumming Somewhere over the rainbow.

This was not what the crowds were here for. Just imagine everyone streaming towards the exits. Skedaddled means to “depart quickly”.  Imagine an entire amphitheatre empty in 5 minutes.

Jesus, on stage, finishes his song and looks at the empty stadium. He then looks back at his bandmates, the 12 disciples, and asks, “Will you leave too?”  Simon Peter answers for all of them. Let’s look back at the text again here:

Simon Peter answered him, “Master, to whom shall we go? You have the words of eternal life. We have come to believe and are convinced that you are the Holy One of God.”

Simon Peter nails it! Even Jesus was surprised by this answer. Jesus says that the Father revealed this to Simon Peter.

What is the lesson we take away from this?

There are going to be times in your life where people are going to challenge what you know to be true. Some people are going to say “Look how many people have left the Church, how can it be true?” What Simon-Peter shows us today is that we regardless of how the crowd is skedaddling, we have to be steadfast in our beliefs, because only Jesus has the “words of everlasting life”

Because life will challenge our beliefs. People will not want to be around us because of what we profess. We too, need to be steadfast  – a ROCK for Christ.

This entry was posted in Uncategorized. Bookmark the permalink.