An Entrepeneur’s Perspective on the Pandemic Stimulus 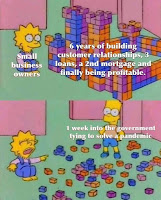 Every small business owner I know is braver than this!

My friend Bo recently shared this quote with me

“There are no atheists in foxholes, and there are no capitalists in a crisis.”

I am stunned by what I have read about the government stimulus. While I am poised be “given” a significant chunk of money both personally and for my small business, I think both of these giveaways are terrible ideas.

The gut reaction people will say is “if you don’t need the money, don’t take it!”, but this doesn’t address the key point of whether this is good or bad policy. The main problem is that this law grows our debt tremendously and solves the wrong problems.

We had 3 million people apply for unemployment last period. Right now we have about 150 million people working. Let’s assume, worst case, the number of unemployed goes up tenfold to 30 million.

This law will give the majority of our workers $1200. What rational do we have to give $140 plus billion dollars out to those workers who have not lost their jobs? Certainly some people need this assistance, but not the majority. Most of us are still working. Working from home. Working in the fields. Working at an essential business. All getting our regular paycheck. This part of the population does not need this money!

Will many people be happy to receive $1200? Probably. But that does not make it a good law.

This is an extra $2400 monthly for people on unemployment – this is pretty significant. To be fair, it goes to the people who are directly getting hurt by the lay-offs due to this pandemic, which is far better than the $1200 per person check above.

The problem arises in that it applies to part time people and to people in areas of the country where the cost of living is low. If you were receiving $1000 a week for not working (adding together your state benefit of $400 and your federal benefit of $600) and you would only earn $800 a week working, which would you choose?

This one is going to extend the recession we are in. None of the people on unemployment will want to go back to the private sector until the 4 month bonusperiod ends.

And the excuse the politicians gave for signing this into law was that it would take 6-8 months to create a computer program to do some simple subtraction to figure out the difference between the federal rate and the state rate. See Senator Lindsey Graham speak abot this with your own ears.

This is ludicrous and in my opinion, all these idiots who believed this lie should be fired. The only thing that is holding this from being solved are regulations on who can work on what system and how the systems connect.

The “Small Business Interruption Loans” proposes to provide forgivable loans to more than 30 million small businesses. As a small business owner, I can now apply for a loan for up to four months of my company expenses – salaries, utilities, rent, interest on loans and more. This can be as much as $10 million for any company with less than 500 people.

Here’s the kicker – if I keep my employee count steady from March to June, I basically get the entirety of this money forgiven. This means the US government could pay the salaries for 4 months of every small business in the country which applies for these loans. You just have to keep the employees on payroll.

This is whether or not your company needs it. Of course many companies are going to take advantage of this, even if they do not need the help. Why wouldn’t they? For my company, this will be a $500K gift.

And it doesn’t seem to have any penalty if you fire the employees you “retained” all after June.

The government seems to be hell bent on doing something, even if that something is mortgaging our children’s future. And the $2 trillion price tag looks like it could expand to $6 trillion? Incredible.

Yes, many people are hurting – I understand this. If I had things my way, I would hope that we as a people should be able to help those losing their jobs without a massive government give-out. Instead, most of us sacrifice little or nothing, thinking that the government will take care of things without our action.

As I previously wrote, I really though there was a huge opportunity for our country and citizenry to become a more giving people with this pandemic bearing down upon us. But to move us to this action, it would have taken brave leadership from the President and leadership from the Congress. Nobody had the cojones needed to challenge the citizens of our country to sacrifice for each other to get us through this.

During our travels in England, I read about people rationing food during WWII. Citizens partnered with brave soldiers fighting so that continental Europe might be free. That was real sacrifice. Nothing people do now compares. Instead, people complain about how hard it is not to go out so often. How difficult it is to both work and teach their own kids at home. How happy they are to have Netflix to binge-watch because they don’t know what to do with their time.

Dennis Prager wrote an article with a title, “The Bigger the Government, the Smaller the Citizen” that speaks to this. As a nation, we are pushing to have a government that is our constant protector. But what we have given up is our capability to individually choose to help our fellow men. So we do things like purchase 10x the amount of toilet paper anyone might ever need – because we only look out for ourselves and our little circle of people.

Is there any place for government actions? Certainly. None of us have the wherewithal to help a Boeing, any of the airlines or even some moderately sized companies like Ace Parking. But by taking care of their employees in an intelligent manner, focusing on those employees with real needs instead of mass payoffs, it reduces large company’s costs dramatically by mostly eliminating their payroll expenses temporarily and maybe puts them in a position where they can weather the storms without huge government handouts.

And maybe, if we do this enough, we could build our national character so we feel proud of real achievements and real sacrifice. We can feel the satisfaction of knowing we helped one another and supported our fellow citizens in a difficult time instead of giving ourselves congratulatory pats of the back for taking the easy way out again.

prior comments from the previous location of this writing

This entry was posted in Thoughts. Bookmark the permalink.